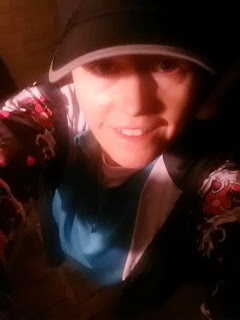 Ready for the long drive to the start
After a phone call that began, "First off, I'm alright." it was no wonder I didn't sleep much in the few hours I could have slept prior to the Boyers Furnace 40.  The super secret spy had been in a minor accident back home while I was preparing for my race.  My restless night was caused more by the concern whether I should still be running than it was from any worry that the race would be challenging.  But with his reassurance that he was okay I gathered my gear and headed out into the darkness. 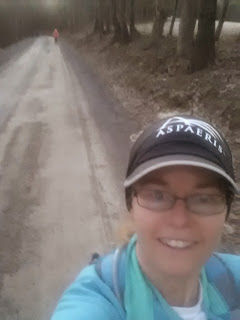 Being late also meant I got to see the sweeper, Diane.
I often say that my biggest worry about each race is simply getting there on time.  Boyer Furnace provided me with practice on what happens when you don't get there on time.  I was the last person to arrive.  I started about 18 minutes late.  One wrong turn will do that.  Luckily being the last one to arrive had it's perks.  Alan was generous enough to give me a drive to the start with all my aid station donations and gear.  It was only three tenths of a mile but not having to carry everything and potentially make two trips was a real help.  Thanks Alan. 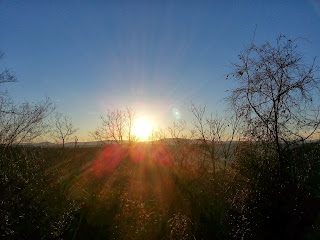 The sun rising over the mountains
After dropping my aid station donations and drop bag, I was off running to catch up with the runners.  First I caught up with Diane who would be sweeping the course.  We chatted for a while but I soon had to continue on to attempt to get a little closer to the pack of runners. 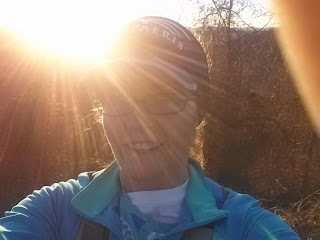 Finally starting to warm up
Within the first five miles I had caught up with other runners.  I fell into pace with a gentleman and he and I passed several runners.  He chatted with me about the history of the area as we ran over the trails.  As the sun was rising and the day was beginning to warm we paused to remove a layer at the top of a climb.  While we were enjoying the scenery two female runners caught up to us.  I told them I would catch them and they continued on as I finished gathering my gear.  I enjoyed running solo for a while and only hearing my lone footfalls on the fallen leaves.  I came to a split in the trail where a pink trail went left off the orange blazed Massanutten Trail.  For a moment I wondered if the other runners had taken that trail but, not seeing anyone I continued to follow the orange trail happy to have the forest serenity all to myself. 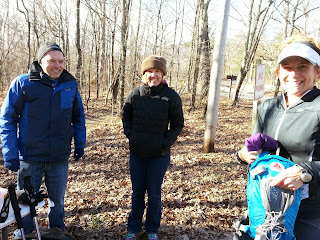 Mile 12.  Wonderful aid station volunteers.  Hot soup!
After some miles I heard voices ahead of me on the trail.  I would catch glimpses of two female runners as the trail weaved through the forest.  Certain that they were the runner I had been with earlier I quicken my pace to catch them.  However they were not the runners from earlier, it was Katie and Tracy.  Two wonderful trail companions that I would share the majority of the remaining day with. 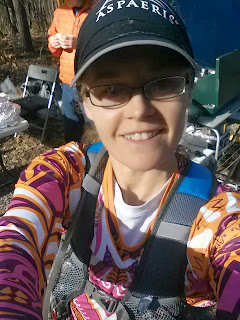 A quick shirt change at the mile 21 aid station
Tracy, Katie and I ran together into the mile 21 aid station.  The pace felt relaxed and with no need to push I enjoyed getting to know my trail companions.  We chatted about Whole30, running plans,  and families.  We shared running stories.  Katie entertained us with a tale from one of her Laurel Highland experiences.  We discussed the interest techniques of all the dog-laden bear hunters we ran past.  The miles ticked away as we ran into the Camp Roo aid station. 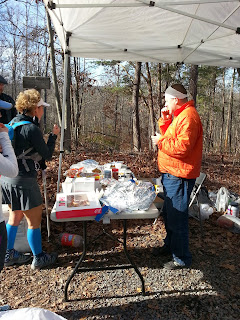 Dave providing runners with peanut butter banana hor d'oeuvres
I grabbed a dry shirt from my drop bag and my headlamp.  Although we had made it Camp Roo under 5 hours I knew that the second half of the race would be much slower.  I ate some banana and a small cup of coke from the aid station and some apple sauce from my drop bag.  We all headed up the orange trail for the climb to the east ridge. 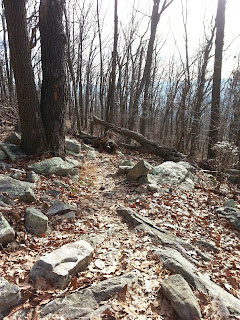 Beautiful single track
As we climbed I seemed to hit a slightly faster pace than Tracy and Katie and felt comfortable so I continued to pull ahead.  I knew I would benefit from a little alone time under the trees. 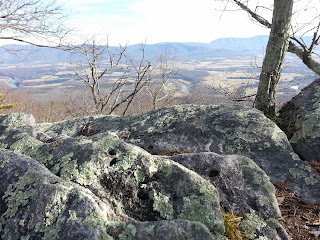 Amazing views
Running solo again I paused to take in the scenery, answer a nature call and simply enjoy where I was lucky enough to be.  My thoughts had never left the super secret spy.  I wondered how he was feeling and hoped the kids were being helpful.  His accident regardless of how minor was a reminder that I am so very blessed to be doing what I love to do.  Although a thread of guilt did run through me all day that I was out in this amazing place while he was uncomfortably recovering at home.  I knew that he wanted me to be getting everything I could from this run.  He wants to see me cross those finish lines more than anyone else so I pushed. 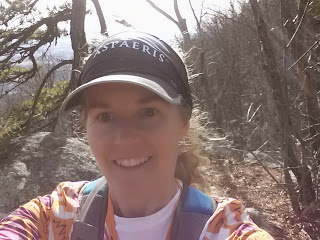 Loving being on the trail
As I left the Camp Roo aid station I was told that the next 12 mile stretch was a tough one.  So I was determined to push to keep my effort up.  As we topped the climb and turned left to head to the ridge line I was surprisingly greeted with wide open trail to run.  It would take a while for the trail to narrow and climb to it's ultimate rocky ribbon of a trail and force my pace slower and slower as I took in the amazing views. 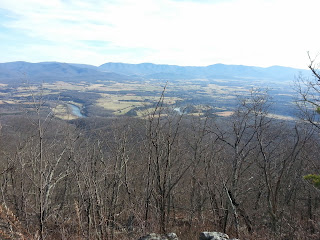 Doesn't do the view justice
Although I knew the turn sheet had 12 miles on the orange trail before the next mention of a trail change, I was still puzzled when I came onto a set a double pink ribbons on a side trail.  I ran a bit farther up the trail but returned to the ribbons and waited to Katie and Tracy to confirm the course.  It was a treat to sit and be still in the middle of the forest.  To listen to the nothing that was all around me.  Occasionally I'd hear a bird call or something crunch across the fallen leaves but mostly it was blissfully quiet.  Finally the girls arrived and confirmed that we were to stay on the ridge line through the next aid station at Milford Gap. 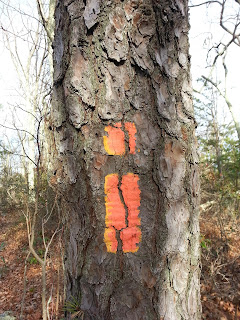 Orange blazes remind me that "I" can do this.
Once again I pulled ahead of the trail companions before running into Milford Gap but not before Paul passed me.  He was running as if rocks and a ribbon of trail were he native ground.  Paul and I chatted briefly and he was off to Milford.  Shortly after Paul's departure Alan caught up to me and we ran into Milford together.  I was so happy to reach the aid station.  The section had been hard and I had gotten the warmest of the day, going through all of my water.  I had chosen to only fill it with about 40 oz. at the race start and not top it off until Milford.  That choice was almost a bad one when I realized the aid station was almost out of water.  Luckily they had enough to give Alan and I enough to carry us through.  They did have super hot soup!  I enjoyed my third cup of soup for the day as I walked out the of aid station and into the next section. 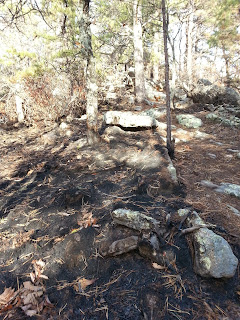 Much of the ridge line was burnt
Boyers Furnace is considered a "fat ass" event.  That means you don't pay, you don't get a medal and the race is "limitedly supported."  VHTRC doesn't "limitedly support" anything in my experience.  The aid stations were abundant, cheerfully staffed and generously supplied.  At three aid stations I had warm soup which is my favorite fueling option!  The volunteers would helped support this race gave much more than just their day.  It takes more than just stand behind a table in the middle of the woods to pull off this level of support.  I can't thank everyone involved enough.  Thank you to Tony and Carter for organizing the event.  Also to Carter and Alan for opening their home to a group of less then clean but cheerful runners.  And many more thanks to all the volunteers who cheered us along the way. 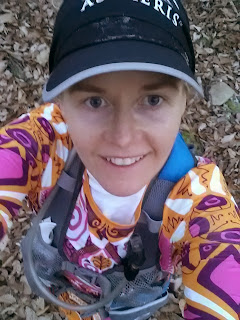 It's going to get dark
Back on the trail I was running solo again.  I could occasionally hear Katie and Tracy chatting in the distance but I moved along hoping I could make Veach Gap before darkness fell.  I knew that my pace would slow in the dark and I wanted to make as much ground as I could before that. 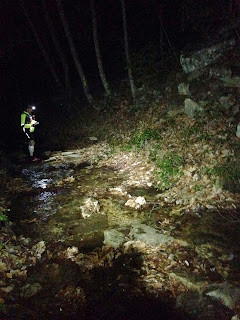 The trail was IN the river!
Thanks Katie K for the photo
As darkness fell my pace did slow and I ended up running with Katie and Tracy again.  The company was nice and the occasional chatter was welcome.  We made good progress down the blue/orange trail.  I had another moment of indecision as I pulled ahead again but thankfully the girls were close behind and we headed down the trail again together.  The trail had returned to the low lands and was wet shoe sucking mud running.  We were treated to some more company as we approached our final trail when we came upon Paul.  He waited when he wasn't sure where the yellow trail was.  He had good reason for question because the yellow trail actually continued within a river and headed downstream before existing the other side.  With our feet numb from the icy water we made our way to the trail end and a final aid station.  Tracy was surprised to see her husband waiting for her there.  I ate half a nearly frozen banana and we were off. 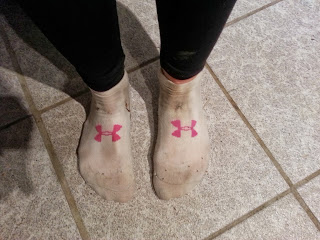 Wet, cold and dirty but done.
The final section of race was a stretch that seemed to go on forever changing from trail to gravel road as we ran into the night.  After a challenging day in the woods we finally turned onto Carter's road and ran through her front yard and to her front porch, our finish line.
﻿
Posted by Shellyrm ~ just a country runner at 7:28 AM 4 comments:

Usually if I am the first one awake in the house I would be eager to sneak off for an early morning run but the first day of the New Year holds a different kind of anticipation for me.  Because this morning I woke up before everyone else to hold myself accountable to start this all over again. 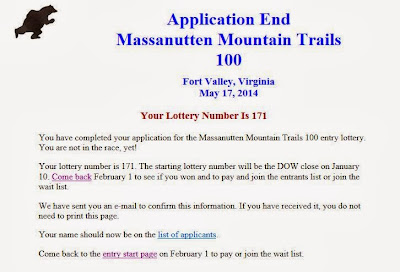 Potential runners have until January 8th to enter their name for the lottery so there was no need to get up this morning after a very late night.  I could still be snuggle warm in my bed but I needed to do this.  I needed to put my hand up first and say, Pick Me! Pick Me!
The journey begins again.  Fingers Crossed.