But I thought you said 6 miles 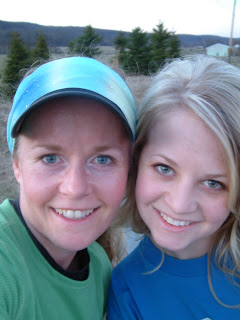 Just when I was needed my lovely biking sherpa she is there for me!
Isn't she just the cutest thing?
Of course that was after 2 days of harassing emails and text messages asking her to go with me, begging her to go with me, telling her that her butt was getting bigger from not exercising, asking if she'd died and what I should wear to the funeral because I knew that was the only way she would keep ignoring my messages; you know generally just nicely motivating her to be active.
So finally we are able to work out a pace re-setting run together.
The next snag.  Hubbs won't be home in time to watch littlest so I will have to take him along.  Okay.  Roll with it.  You gotta do what you gotta do, right?
Littlest and I run to biking sherpa's house and see that true to form biking sherpa looks like a raging rock star with her newly coiffed hair.  But she was ready to roll.
Biking sherpa tell her mama that we will be back in an hour.  Her mama laughs, "Yeah, unless you get talked into another long run!"  We all laugh about how I like to get biking sherpa out on the trail and then surprise her with wanting to go further than I orginally told her.  We laugh that it might be two hours.
This my friends is what you call foreshadowing.  I didn't see it at the time but in hindsight; foreshadowing! 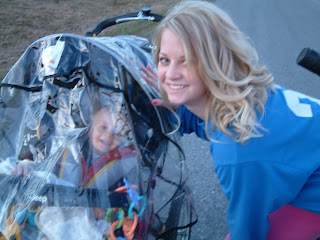 We run along our usual loop that can take us either 6.5 or 9.5 depending which way we turn.  As we near the intersection we decide to continue on for the longer distance since it is so nice outside and we are chatting up a storm.
We haven't gone an 8th of a mile when biking sherpa says, "You know I don't really like that route.  Let's do something different."  "No problem.  We have lots of intersecting roads.  Where do you want to go?", I ask.  Biking sherpa suggests that we try a road that will bring us out on our 16+mile route so we would know where we were.  The only problem was we didn't know how much distance our little excursion would add to the night.  Remember I am pushing the jogger and had perpared for a 6ish mile run.
We happily turn onto a road that I haven't been on in years.  Two big black dogs try to deter our progress. (biking sherpa is very afraid of barking dogs)  We successfully get past the dogs and continue on our adventure making choices along the way of which intersecting road to take; left or right became the question of the evening.
We are having loads of fun and that kept me going for the first hour twenty minutes and then I realized that my body had run out of sugar and we were still miles from home!  Luckily littlest didn't mind sharing his crackers with us and I had brought the entire box!
It got dark.  It got cold.  I got tired.
Biking sherpa did a great job taking over the talking when all I had left was to run.  She sang with littlest to keep him entertained.  (Littlest was GREAT the entire time.  He deserved all the extra cuddling he got after this unexpected long run!)
She pushed me to try and keep my pace up.  I can not thank biking sherpa enough!  Even though my legs were not too happy with her choice to "try something new" at the time.
We finally made it back to the house 1:58:23 later.  We laughed about our choices of roads and talked about wanting to know how long the route might be if next time we take different roads.
I finally got inside and tended to all the things I should have been doing a hour earlier.  Once I got a free moment I checked the distance we had traveled.
13.19 miles
Just a little more than we had planned.
God bless the jogging stroller
Posted by Shellyrm ~ just a country runner at 9:19 AM