3 things thursday ~ The Bad, The Good, The Both Edition 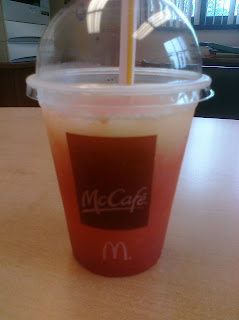 THE BAD
This morning I was excited to try McDonald's New frozen Strawberry Lemonade.
With summer and the heat fast approaching it would have been a nice refreshing addition to my summer indulgences.
Not so much.
It's terrible.  Even for just 25 cents to try it today.  It's terrible.
First they present it with strawberry syrup at the bottom.  Perhaps for the visual effect?!  But be warned don't sample it that way, sweetness overload.  It takes forever to stir the drink together which you would want to do to off set the sickeningly sweet strawberry with the unbelievably bitter lemon.
I love sour and thought that this would be a tangy cool treat.  As a avid stockholder, I am disappointed in such a terrible product making it to McDonald's counters.
Thumbs way down.
Do Not Buy. 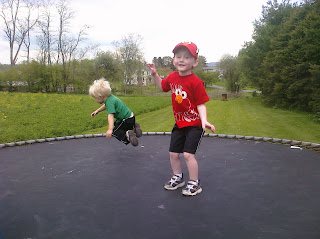 THE GOOD AND THE BAD
After my evening run the kids and I went to my older sister's to visit while they were working outside.  My younger sister was also visiting so our two little boys played on the trampoline supervised by their mush older cousins.  They were having a great time until Debbie Downer aka Me showed up on the scene.  Those two boys were bouncing each other so high, I just knew that one of them might flop off!  And I started freaking out that they had to stop.  Yeah, I was the bad thing that ended their good time.
Sorry boys.  Safety first. 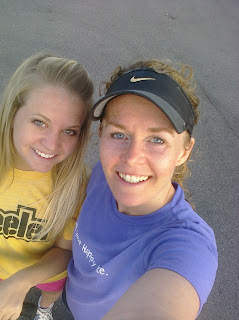 Today is Day # 368
More 365 Days of Running posts to come soon
THE GOOD
Biking Sherpa has made her return to fitness for the season.  She is such a wonderful help to my training efforts.  While she thinks I push her to be motivated, I know she encourages me to keep my training at a harder level than I would without her.
Take our last outing.  We went our most frequent loop on which I had discovered a new and very large dog.  After my first encounter with Dinosaur Dog (because he is HUGE) the day earlier I knew that I would have to keep his presence a secret from Biking Sherpa due to her insane fear of dogs.  So after not sending a persuasive text that read, "I'm Persistent.  Not Pathetic.  This is your running invitation for the week."
because I often invite her multiple times before I can get her off her butt to accept.
but instead pressing send on a more encouraging sounding text nicely requesting her company, she accepted.
And as soon as she laced up her kicks, we were off.  We were both feeling stronger than usual at the start which was nice to have us both on the same effort level given the immediate and constant hills we encounter.
We biked/ran along chatting up a storm and setting a strong pace all the while I was planning when would be a good time to spring the Dino Dog news on her.  I knew if I told her too early she would want to turn around a cut our run short.
That's a No Go for Shelly.
I sprinted to keep along side her each time she would drift away on the down hills.  With the day's heat, I was sure I was going to fall over from dehydration.  Yeah, no water...duh.
As we neared Dino Dog, Biking Sherpa was cruising down a steep down hill but I tried to sprint and chat so that she would stay with me.  It worked just as we finished the downhill and crested our next grade I jumped along side her bike putting myself between her and Dino Dog's property.  I explained it all to her.  Luckily two things happened; Dino Dog was in his kennel behind the house and Biking Sherpa laughed.
So glad she thought it was all funny!
We shave about 3 minutes off our time, that's always good.
pssst! check out my new button on the right.
Click it to Vote for Me
on Circle of Moms Fitness Blogs.
Thanks!
Posted by Shellyrm ~ just a country runner at 2:00 PM