Busting at the Seams

I have a pair of shoes. 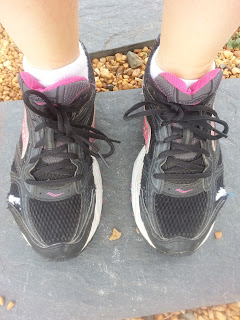 They have been like that friend that you have that no one else seems to understand why you like.  So you try to down play their flaws in the hopes that you can make them more likable to everyone else.  These shoes worn oddly from the very first week.  The bottoms are worn into a wedge from landing on the outside ball of my foot putting a lot of stress on the outside seams of the shoe.  As you can see where the "leather" was sown to the mesh fabric on both shoes, the seams have torn.  I have worn these shoes on groomed trails so I assumed that the extra stress on those seams from the often titled terrain and my foot strike aided in the early demise of these shoes.  There I go, making excuses for my friend.  But the seam on the inside where the "leather"﻿ meets the fabric has also completely torn.
But I still pull these on.  I have other new shoes still sitting in their boxes but when I am just hitting the mill or going out for a short run up the road, I grab these sad shoes.  I just feel so bad for them.  They just didn't live up to the logo they boast on their sides.
So this morning I pull the dryer sheets out of them -
What?  Am I the only one who puts dryer sheets in their stinky shoes?
- and pulled them on thinking it was going to be a short run day.  They clearly are not  the shoes to wear for a 14 mile run which is what my morning turned out to be.  But since their life has been so short it's hard to let them go.  They probably thought they were destined for so much more.
Did you ever have a pair of your loyal shoes fail sooner than expected?
Did it cause you to switch brands?
Posted by Shellyrm ~ just a country runner at 8:51 AM