There I was running in my favorite place, powering up one of my favorite hills when I saw him.
A new dog on my route. 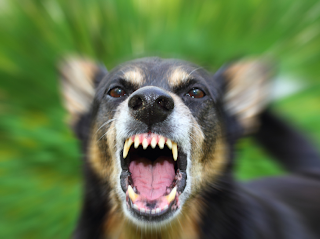 Luckily I saw someone in the yard mowing as the muscular creature trots toward me.  The owner hears fido barking at me and yells no.  To this command fido appeared deaf and continued to leave his yard to rip my leg off get a closer look at me.  I see what I think is a shock collar and ask the owner if the dog has one, aka asking if they turned the dumb thing on.  Not that the shock collar was going to stop this particular creature given it's size.  The owner replied to my question with my favorite thing owners say, "No don't worry.  He doesn't bite."
Seriously.
As rover's warning beeps sounded he was in the middle of the road one quick lunge away from ending my running streak.  Being the smart ass that I am I asked the owner if her dog had teeth.  Because if he did, he could bite.  And he clearly was not obeying her or his shock collar.  The owner was not amused by my statement and continued to explain that rover would lick me to death but would not bite. 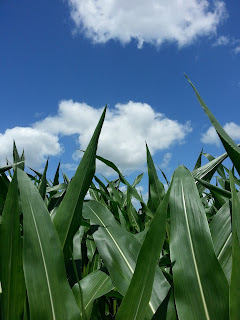 Okay.  I figured I am not giving up my favorite route just because of one new dog.  I'm running in Heaven so nothing bad could happen, right?!  Plus fido was wearing a shock collar and the owner was right there so I would just see how friendly he was.  If he did bite me I would be rethinking that smart ass comment with my life hanging in the hands reaction time.  So as the owner continued to reassure me, I took two steps closer to the creature whose head was as big as my pelvis.  Fido took one sniff of me and began to bark vigorously.  It's not the dog's breed that gave me extra concern, it was fido's build.  He was a solid, huge headed, massively jawed biting machine.  So maybe this particular canine hasn't used the qualities he was breed to have, that doesn't mean they aren't there.
I had enough information to know that I will be very aware when I run by this house from now on.  Situational awareness.  That's all.  A little recon to make it safer when Biking Sherpa is with me since she has a fear of dogs and bikes seem to bring out the chase -  run down and maim -  instinct in canines. 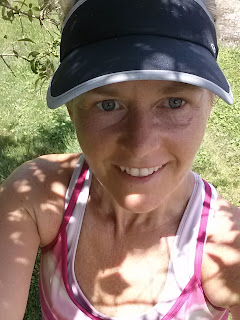 I doubt I made a new friend in this pit bull's owner.  Yeah fido is a pit bull.  A big one.  But his breed really doesn't have anything to do with my concern.  It's simply his teeth.
What's your favorite dog owner saying?
How do you handle new dogs on your routes?
Who wants to bet Biking Sherpa is up for a long route that doesn't involve passing the new dog?

If you liked this post check out THIS one about dogs.
Posted by Shellyrm ~ just a country runner at 7:34 AM