As a runner it is usually while running that I notice drivers but in the past 24 hours drivers have been really getting on my nerves in my everyday life.  Take for example my drive home after work yesterday.  I was going through an area near our middle and high schools.  This area is residential so the speed limit is set very low and there are two 90 degree turns.  As I was winding my way through I cam upon a car with two young boys in it.  Well, sorta in it.  One of them was sitting in the open window of the car apparently videoing two other young boys who were on scooter holding onto the cars open windows as it came towards me.
Luckily I paying attention or I would have hit the young man holding onto the driver's door.  As I drove off the road to avoid him, he politely snarkily said, "Heeelllllooooo" as I gave him my best disappointed grownup look.
Despite much googling I could not come up with a photo to represent what I saw.  I did however find video of teens doing this same behavior.

You don't have to watch this whole video but what I found interesting is that the young lady doesn't want to do this but the male voice, presumably the driver, pressures her into it.

My next run in with a driver was when the driver of my daughter's school bus barely paused at our house this morning.
4 minutes early. 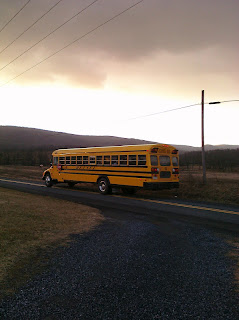 I keep a diligent eye on our time in the morning.  I carry my cell phone from 7 a.m. until after the bus goes.  This habit eliminates any human error from watching a clock that I might have set wrong.
This morning at 7:17 I ran downstairs to bring our dogs into the house so that they would not try to get on the bus with S'ghetti Girl.  As I ran back up the steps the bus was pulling away from our drive at 7:20.  Our bus is due at 7:23.
I raced down our very short driveway yelling.  The kids on the bus saw me.  Our driver did not stop.  S'ghetti Girl grabbed her things and we jumped into the car and chased down the bus two stops later.
No major harm.  But I wonder why is it that getting behind the wheel makes people act like they have lost all common sense?
That driver could have easily stopped out of kindness due to her early arrival.  Those kids could have gotten into that car if they need a quicker ride home.  As far as I know nothing bad has come from either situation but it could have.  I could have been distracted and hit that boy.  I could have wrecked my car "chasing down" the bus.  All because, in my opinion, there was a lack of common sense.
But that is just what I think.
So tell me, how would you have handled these situations?
Would you do anything further about the kid's behavior or the bus driver's?
What have you seen or been guilty of on the road ways lately?
Hashawha Hills 50k tomorrow watch for an update on FB if you follow me there.
In the area, let me know so we can get together.
Run strong and have fun to everyone racing this weekend.
Posted by Shellyrm ~ just a country runner at 8:26 AM