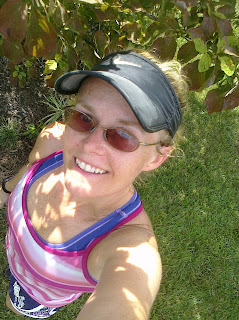 Today is Day 838
With only three wake ups since school started it may be a little early to say I've settled into a routine but I was able to get out for at least one run a day with a semi-cooperative LBM.
One thing I have already learned is to take advantage of every opportunity.  Take this morning.  After dropping S'ghetti Girl at school, LBM and I returned home to start his preschool day.  He was less than excited about it as he fell sleep on the ride back from morning drop off.  Since he did so well sticking to our schedule yesterday, I decided to keep him awake so I sat him in the living room while I ran upstairs.  That's all it took.  2 minutes to brush my teeth and he was asleep again.
Ugh!  What to do?  What to do?  I knew he was tired since our ac upstairs decided to conk out yesterday leaving our bedrooms toasty.  I debated about waking him.  I thought about pulling on my running clothes and running up and down our driveway.  I considered doing some Insanity.  In the end I figured he wouldn't sleep long in the bright sun-filled living room so I did what any normal person would do.  I got a cup of coffee and sat down at my computer.
Close to two hours later I have accomplished very little outside of sitting in front of my computer.  Ugh!  Another opportunity to get something, anything done and I didn't see it.    I did actually get a few household chores done that otherwise would have just been put off until....later?  Because if I had a treadmill I would have filled my time with running in one place.
Speaking of not having a treadmill, I am looking at an option.  An incline trainer.  Ever used one?  What did you think?  Any thoughts on how an incline trainer holds up?
So before this little morning nap enters it's second hour I better do the unthinkable and wake a sleeping little one.  Ugh!  If only I had put him in the jogger after school drop off.  Now that would have been smart thinking!
What has been your biggest new routine screw up?
Help me feel like I am not alone in this and share.
Posted by Shellyrm ~ just a country runner at 7:26 AM

Labels: back to school, I Run Everyday, LBM