This past Sunday I didn't spend the day thinking about the date on the calendar.  I spent the day on the trails in the Green Ridge State Forest reminding myself just what it is about running that I fell in love with.
This training run was for the Fire on the Mountain Trail 50k presented by Sheetz.
Did you wait too long to register?  You can still volunteer!
After deciding that I wouldn't skip out and racing to gather my gear, I quickly checked Facebook to see if the RD had updated anything about the run.  With only a few runners attending this training run there was the possibility that he might change or cancel the run.  His last post said he was headed out to the start...or finish as it were. 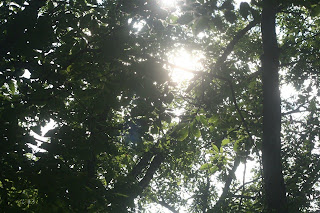 I drove like a maniac to get the the finish area only to end up being the first one there.  Quickly followed by the RD and two other runners who had parked at the wrong field.  It was going to be a small group, only four of us.  The RD, Kevin and myself running the first half together and the other two runners, who were brothers, planning to stay together for the 16.5 mile run.
After arranging cars at the finish, half way and start we were all ready to go. 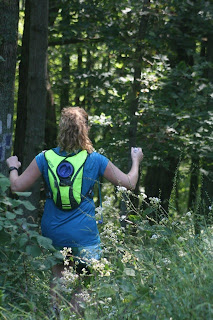 The first "half" of the run was over 8 miles of forest roads meaning dirt and rock covered and long and boring.  The plus to this section was the Kevin would be running with me.  That was a plus for me however after Kevin realized that I am terrible at holding a steady pace I'm sure he was ready to kill me!  I can think of one downhill in particular that he probably wanted to trip me ask me kindly to shut up already.  I can get kinda annoying when I am that "high" on running! 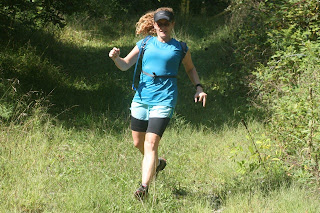 But who could blame me?  Great conversation, breezes to feel, amazing views, critters to see, all the great forest smells; I was in heaven.  Sadly all too soon Kevin and I were back at his car.  After a discussion about whether or not I should wait for the other runners so I wouldn't get lost to help encourage them and trying to convince Kevin to keep running, I was about to head into the woods when they caught up.  The three of us hit the trails together with Kevin ready to meet us are points along the course to offer direction and support as needed.  Plus it never hurts to have a photog available to capture those running moments.
Thanks Kevin!
Even though the race course was not marked as it will be on race day, I was surprised how little trouble I had following the blazes on the trail.  I had to remind myself that having run this course/race HERE before I knew that DNR did an exceptional job keeping these trails well marked and even without race markings I only had brief moments of question.  Which were usually based on wanting to go down a hill and not up!
Being a training run and more about time on my feet than covering the distance within a certain pace, I did a bit of trail clearing as I ran.  The recent storms had put a lot of branches across the trail and any I removed now would be a few less to trip over on race day. 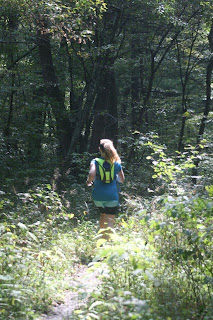 To say that 3 hours flew by is not an understatement.  As I neared the finish area I couldn't believe that I was going to be done so soon.  Even though I beat Kevin there and completely could have skipped the "victory lap" around the field; which is part of the official course on race day, I ran my lap thinking that there is little to explain the comfortable feeling I have when running amongst the trees.  I can only hope that race day will bring the same kind of calmness and enjoyment to me and all my fellow runners.
Posted by Shellyrm ~ just a country runner at 1:13 PM