I have had a few years of keeping kiddos entertained during runs.  What works best varies, with each of my children it has been different.  Currently with LBM aka little bug man, not surprisingly noticing "wildlife" on the small scale has been very useful.
Take last night's run.  I had planned to run on the treadmill to "baby" my legs after the trail run on Sunday but it was simply too nice to be inside so LBM and I braved the hills and went out for 6.5 miles.  Not long into our run is where we met him.
The innocent victim. 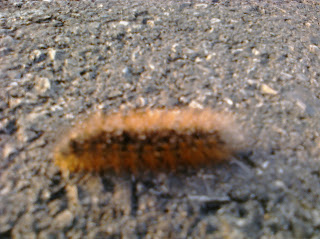 Full Disclosure:  This is not the actual woolly worm.  It's not a woolly worm at all.
This poor guy was simply around for the photo op.  He's the good looking stand in.
Like any experienced jogging stroller mom, I have everything and the kitchen sink in that little basket under the jogger including items to gather miniature wildlife for closer examination.  After multiple stops to reposition the woolly worm on LBM's hand or stroller tray, LBM decided that he needed to help the woolly worm escape a life of supression living in fear of spider thugs and crows mafia-types aka relocate him to our yard.  A baggie ensured safety for the woolly worm remainder of the run. 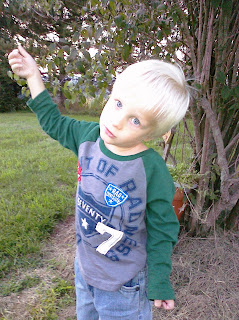 LBM was trying to convince me that the woolly worm needed to be forced lovingly placed on that branch.  Once home and after much discussion it was decided that woolly worm did not need the protection of the inside of our home and he was placed on our mock pear tree to establish is new life. 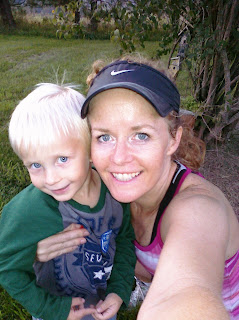 Today is Day # 492
You just never know how or who you might help as a runner.
Posted by Shellyrm ~ just a country runner at 11:24 AM