Back to work. Aggh! But glad to have a good job to go to! So I eagerly got up for a quick out and back of 3.5 miles in the refreshingly cool morning air. 27:31 (7:51) A bit faster than I wanted but I wasn't watching my time as much as I was enjoying being outside.

A quick shower and then nursing the littlest before we were off to work. Another wonderfully busy day at work. I love how the time flies when I am that busy! Then it was off to pick up the kiddos and head home.
Round #2 of running was (agggh) on the treadmill. However, I was watching a movie that had my attention so the time flew by. 10 miles 1:13:33 (7:21). I know, I should check my pace more...and stop increasing it because too many miles like that are going to injury me! I know that my form suffers when I run that fast. Honestly, I know I can not run the pace correctly so I don't run that pace when I am racing. Well, in marathons I often do what I know is potential wrong because I put in 6 to 7 miles at a 7ish minute mile pace to bank time but that is only when I have trained to run the race that way. Do you do that? Run races with different plans depending on your training or the distance or the course?
December 15th - Tuesday

Tuesday are often my offish day of the week during the winter since my daughter has gymnastics and I do not belong to the gym where is takes her lessons. Due to the lack of time I would have I knew in the morning I had to get out for a run. When littlest woke up a 6 for the school bus routine along with my middle one I decided WE were going to go for a run after the bus. It was fairly mild so I bundled littlest up snugly and out we went for the out and back of 3.5 miles. 30:32 (8:43) What a difference a baby and a jogging stroller can make on your pace and effort!
I did notice something during this run. I hesitate to mention it because I know it is nothing! AND I know that it is because I am running too fast on that wonderful (read boring) treadmill. I noticed the bottom of my foot. Now I have never been injured in all the years I have been running so I think thus far I have been really good at listening to my body and I believe that I will continue to do listen well. This noticing. This irritation is just that. An irritation from the improper foot strike on the treadmill due to the ridiculous pace I keep setting. I know that it is my fault and I am really trying to slow it down. Really.
Back to that little run. It was great to be out with littlest who LOVES being outside regardless of the weather. He had a smile plastered on his little face the entire time....and a tv remote clutched in his hands. (He has lo-jack on all cell phones, unattended computers and carelessly laid remote controls within out home or car. Seriously! He can go into a dark room and come out with anything with buttons and lights that he should not have!)

After yesterday's morning run, I skipped running this morning. My legs were not happy and I did think giving my foot a break (which I define as any period of 12 elapsed hours when I don't run).

I chose instead to wait until the evening and then was forced onto the treadmill. I hope the weather settles down so I can get some evening runs to see all the Christmas lights! I did 10 miles 1:10:51 (7:05) I really did try to slow down but I was watching The Curious Case of Benjamin Button and I was just sucked in! I will pay for the speediness via sore legs.

With middle one off to school, I got out for my out and back of 3.5 miles (27:31). The littlest slept through the night AND stayed in bed until after my run! It was great. I hope that this schedule is a sign of things to come. An uninterrupted night of sleep that's what I am grateful for! FYI - my foot was silent running this morning. Yeah.

In un-running related news, we did get our tree up finally. 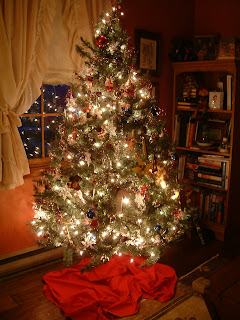 Most of our decorations are things the kiddos

have made over the years. 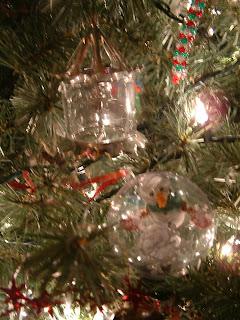 This is ornaments that my middle made

and an ornament that twirls from the heat of the lights.

It was my Daddy's favorite. Our lovely angel my middle one made 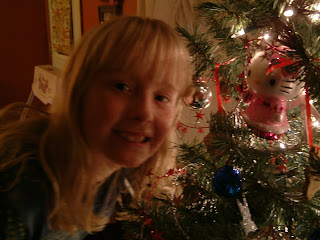 Middle one with her favorite ornament; Hello Kitty.

If you made it all the way here you deserve to know what is up with the Brown Paper Bag. It is a good thing you don't lose HBBC points for eating 'bad' things because I just eat an entire cinnamon roll from Panera Bread...from a brown paper bag. That made it seem even more sinful but...Yuuuuummy!

Posted by Shellyrm ~ just a country runner at 8:43 PM