Speaking of secret identities, I think I have one now too.
I mean I must because I don't know anyone else who would be registered for 2 long races and have a fairly decent lottery entry into a mega long race all within the next 3 months and have yet to concretely discuss those plans with their husband.
I think I should be known as Super Runner Girl.
But I'll let you know if that should be Stupid Runner Girl after I drop the news of multiple hotel reservations on my husband.
I know many of you may think you know Iron Man's secret identity but you don't.
You probably think it's Tony Stark, right?
Naahhh.
It wouldn't be secret if that were true.
But since we're such close and such good friends I'll tell you the truth.
Iron Man's real identity is...
Little Bug Man! 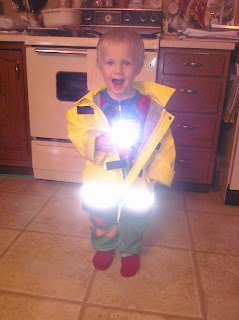 This morning I had to get my miles ran since I have work all day and then have a meeting after work.  I was determined to somehow make it happen but when I woke up at 5:15 running just wasn't what my body wanted to do and my mind couldn't get my legs moving.  Fast forward to 6:30 and we are knee deep in the morning bus routine.  After S'ghetti girl got on the bus LBM and I went to the workout room and I hit the treadmill.  LBM played with the cat and climbed all over the storage boxes.
He must have gotten tired somewhere around 3 miles because that's when is set up his little folding chair in front of the treadmill and after a few minutes....
he turned it off.
What super power is it when you can only fly backwards?
I know you were wishing for a photo of that one.
Posted by Shellyrm ~ just a country runner at 8:21 AM