It's all about the GREEN

This weekend my super secret spy husband had to play spy which left me to take care of all the things that needed done around the house including an errand to the vet.  Which clearing could have been schedule when he could do it.  Since I am the sucker one who brought him the most adorable kitten ever and talked him into providing shelter to yet another of God's furry friends, I didn't grumble too much when he said I needed to adjust my schedule to do it.  Any runner worth their sneaks would have simply gotten up early to get those miles in but not me.  I just knew that I would be able to sleep in and still get my planned run done.
Somehow.
Sleep in didn't happen because LBM was up early after hearing super secret spy husband trying to be quiet while getting out the door.  FAIL.
LBM and I get up and instead of slipping out the door while S'ghetti Girl continued to sleep.
What? I would have slipped a note under the door so she wouldn't have felt abandoned!
We started making breakfast and before we knew it we had to leave for the vet. 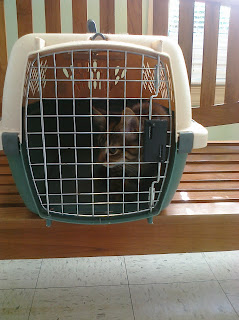 The less than excited PipSqueak aka Pippa
Less than a hour and piles of $$$$ later we had the same healthy cat but now had a white piece of paper telling us she is healthy AND a little white card telling us when we get to bring her back and give them more $$$$ to make sure she A) stays healthy B) doesn't become a mommy C) ensures we've spent so much on her we won't ever get mad enough to kick her out! 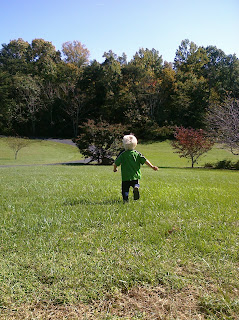 HaHa Mom!  I'm beating you again!
After bonding with Pippa cat I needed to get LBM into the old jogger to attempt to find a route that would allow me to get my miles in since I was needing 8 - 10 miles or at least a hour on my feet.  I was concerned that my regular 8+ mile VA route would be dangerous with the jogger.  Thinking LBM would be getting in the jogger soon we chased each other up and down the hill in the front yard to wear each other him out. 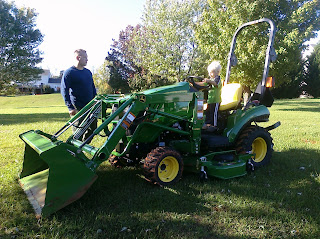 Look out Dad!  I got this.
But before I could convince LBM that he'd love a stroller ride we got settled down to go, super secret spy husband got home.  He must have been able save the world more quickly than he thought.  Of course, that meant it was chore time and onto the Big Green Tractor.  Into the land of yard work we went.  A place where no one keeps track of time and running is NOT a priority.  to anyone but me  Before we knew it our group chores were done and the light was quickly fading from the sky. 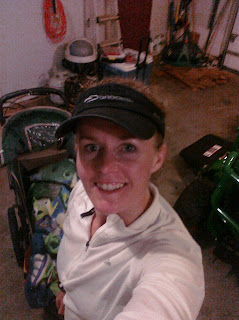 How ever it happens.  My run always makes my day!
That is how I ended up taking a step back week, running along the road with the old green jogger and no headlamp.  I had almost forgotten about that old bare bones forest green jogger sitting in the corner of the garage.  I forgot how much easier it is to push compared to my new spring-action, fully-loaded, children comfort jogger and with the wind, I was glad for it! 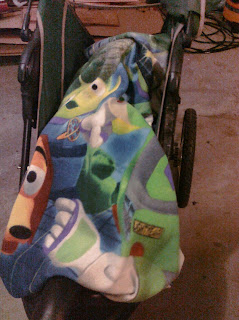 Whatta ya mean?  Dad couldn't just watch me?
I'm just gonna find under here until you're done.
LBM must not have be bothered too much by the lack of thrills.
Although I do think he would have enjoyed having a weather shield.
Posted by Shellyrm ~ just a country runner at 9:47 AM