Oh what have I done!

Today was a much better day for me than yesterday. I got up with a plan for the day and stuck to it! Even with the time change, I got up early and got the kids ready for Sunday School and church. Which has been something we have struggled to accomplish lately. So, yipee for me.

After church my oldest watched the two little kiddos so I could run a solo 6.5 mile loop (48:51). When I got back oldest was sitting behind his gaming computer with littlest asleep in his lap. Noise and all, littlest slept. I had to take a picture. 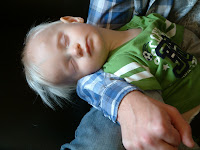 My oldest has joined the Army and will be leaving January 11th. (a.k.a. sad day for mom!) He is hoping to pass the Army PT to complete the work he has been doing (tests and finishing his associates degree) to elevate his rank and pay grade once he starts. I told you all that to explain why after the 6.5 loop and waiting for the littlest to finish his nap on big brother I ran another 2 miles with my oldest while pushing the littlest in the jogger.


So for me I had a good run day. Not the 10 I wanted by close enough. When I push that jogger I always feel like I should be able to count each mile as a mile and a half!


After all the running the kiddos all joined in for the rest of the PT test. Push ups and sit ups. Yippee! To pass my son has to do about 45 of each in 2 minutes. He has a long way to go on push ups and is on track to pass the sit ups.


The rest of the day was productive and busy. Getting things done, preparing to head back into the work and school week. Just like always trying to fit way too much into a day.

As it started to get dark outside super early (yuck), I realized that today would be the perfect day to start my P90X workout program. I wanted to use it over the winter after my oldest leaves for the Army and I lose my daily support for running without any littles with me. But I thought why not?


What have I done? I doubt that I will have use of my arms tomorrow. Which really won't matter because I fairly certain that my stomach won't allow me to stand up completely after all the ab and core work I just did!


And to think I am supposed to do more tomorrow.