Reviews on the Run 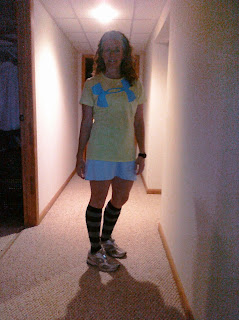 Day # 204 ~ 8 treadmill miles
Occasionally I do look cute.
During my run last evening I finished watching yet another movie.  It is a great way to pass the time and get a little mommy break from the kiddos.  I run with headphones on so that I can escape into the movie and simply put one foot in front of the other.  Easier said than done when watching some movies.

Last night the movie was:
The Final Storm

What Wikipedia says:
Final Storm (source) (working title, The Storm) is a biblical apocalypse thriller film directed by Uwe Boll[1] and written by Canadian screenwriter Tim McGregor.
The plot concerns a mysterious character named Sylas Hendershot (Luke Perry), who takes refuge from a storm in a farm owned by two characters, Tom Grady (Steve Bacic) and Gillian Grady (Lauren Holly). He claims that he should stay and that they should watch after each other. Tom and Gillian, along with their son, soon find that there are more dangerous things than the storm.

I choose this movie because Netflix suggested it.  Also because it was available to view instantly on my computer.  I had high hopes even though the majority of the cast was less than stellar.  (sorry Luke Perry)
Within the first 20 minutes I had already seen the "best" parts of the movie after that it was a down hill slide seemingly into the somewhat lost plot of the movie.
Yeah, what was the plot again?
Since the movie was a complete thumbs way down, I will not bore you with negative criticism about the individual actors.  I felt the lack of story line was the biggest problem with the movie.
If you use Netflix I recommend you click ignore if this title shows up under your suggestions.

There is even a Facebook page for fans HERE.
It has 26 as of this posting.  I won't be joining them.

Tonight's run will feature the movie:  Below.

Amanda at Run to the finish is hosting an OhNuts giveaway.
What better snack to help you through those draining hours of shopping?
So click over and visit with Amanda and see what wonderful things she is up to.
Posted by Shellyrm ~ just a country runner at 9:10 AM