Did you read this (HERE) on Yahoo?
MYTH #4: NEVER LET YOUR KNEES GO PAST YOUR TOES
The claim: Allowing your knees to move too far forward during exercises such as the squat and lunge places dangerous shearing forces on your knee ligaments.
The origin: A 1978 study at Duke University found that keeping the lower leg as vertical as possible during the squat reduced shearing forces on the knee.
The truth: Leaning your torso too far forward, so that your knees stay back, is more likely to cause injury. In 2003, University of Memphis researchers confirmed that knee stress was 28 percent higher when the knees were allowed to move past the toes during the squat. But the researchers also found a countereffect: Hip stress increased nearly 1,000 percent when forward movement of the knee was restricted. The reason: The squatters had to lean their torsos farther forward. And that's a problem, because forces that act on the hip are transferred to the lower back, a more frequent site of injury than the knees.
The new standard: Watch a toddler squat. Push your hips back as far as you can, while keeping your torso as upright as possible. This will reduce the stress on your back and knees. 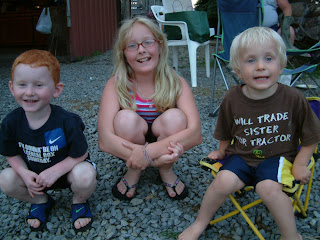 Okay so maybe S'ghetti girl is a bit past a toddler and cousin Z might be a bit old for that moniker too but if this is the new definition of a squat, I have seriously been short changing my workout! 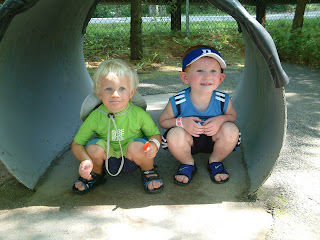 With the mega heat wave we have been having you just never know when GI issues will pop up along the run and a Corn Field Emergency will result.  CFEs aside, if the above truly is the correct demonstrated example of a proper squat I'm not doing them right.
How do you squat?
Knees past the toes or old school?
Posted by Shellyrm ~ just a country runner at 4:15 AM