....it has been confirmed that as of June 21st, 2001 at 7:30 p.m. EST a previously held belief has been disproved.
The famous Biking Sherpa known for her works in educating the minds of the future, tormenting her siblings and encouraging runners to nearly die of heat stroke.
has actually sweat! 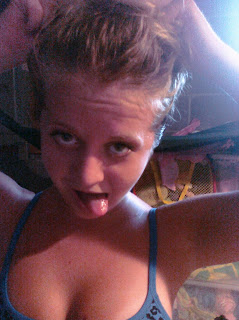 We have photographic evidence and an eye witness account that Biking Sherpa, though previously thought incapable, has perspired.
Testimony from the eye-witness who requested to remain anonymous; ..."she didn't at first but by the end she was actually sweating!  I saw it on her face and back.  I don't think she was used to it."
What is the cause of such a revelation?
Beach Body Insanity - Pure Cardio 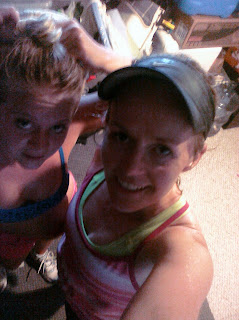 Remember you heard it here first. I'm just a country runner returning you to your normally scheduled running news.
In other running news, Biking Sherpa has been charged with attempted heat stroke induction by forcing encouraging a runner to push her pace during a severe heat wave.  At press time charges were being dropped due to counter charges being filed citing the alleged torture of Biking Sherpa via forced extreme exercise following the run.  Both parties agreed to drop charges.
That's the running news at this hour.
I'm just a country runner and I'll see you next time on the trail. 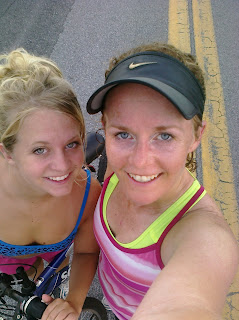 Posted by Shellyrm ~ just a country runner at 7:44 AM