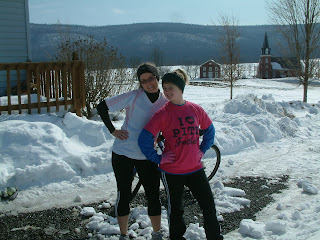 The amazing biking sherpia and I were feeling confident as the sun shone brightly and we goofed off before heading out for my second of two long runs this weekend.  After putting in 15 treadmill miles on Saturday, I wanted to see how my legs would hold up for another 17 being tired.  In that way I could accomplish my 50k+ distance in two days.  I was hoping that completing the distance would give me some confidence about the race since I have had little ability to get out on the trails due to the weather. 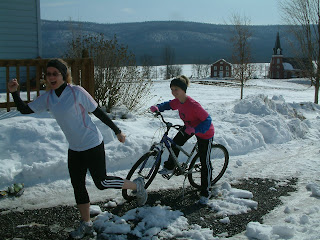 We have all kinds of energy to goof around BEFORE the run! 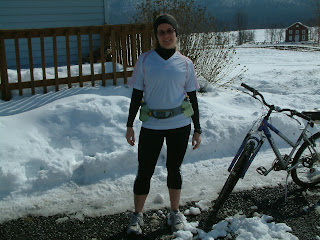 And introducing my Nathan's fuel belt.
I HAVE to take a water bottle to the race or they will not allow me to participate.
Safety issues incase you get lost.
(fills me with a warm and fuzzy feeling about how easy the trail is to read) 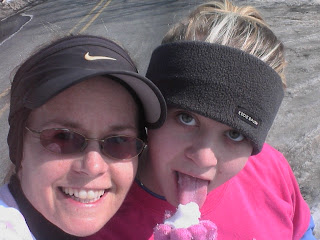 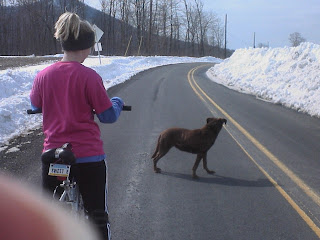 We had a new pack leader for several miles.  This friendly brown dog decided to show us the way. 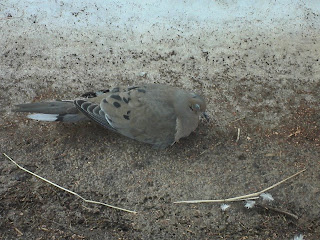 We also saw (and I kindly relocated) this poor little bird.  I think she bounced off a car.  I don't know if she'll make it but I put her on some hay instead of the cold snow.
We ran our 17 mile loop in reverse to see if that lessened some of the major hills.  We have them everywhere!  They are hard to avoid.  We both agreed that it was a wise choose.  Although there were several steep hills we avoided the majority of the long uphill grades and benefited from getting to take them all on the downhill side.
When you run would you rather do short steep hills or long gradual grades? 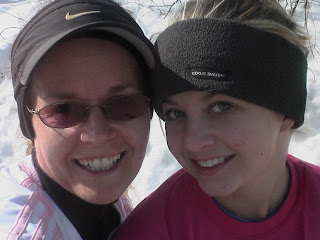