You know what I spent this morning doing?
Researching spiders and praying mantis.
Yeah.  Life in the fast line!﻿
But it is FALL and the spiders and insects are really big now and every.single.one.of.them is
LIVING IN MY BASEMENT.
I do not lie. 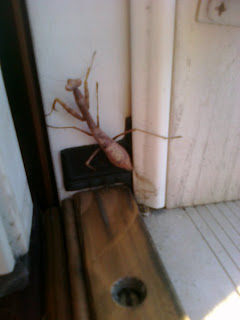 This praying mantis is pink.
They are.
I am not frightened of spiders however; I do not want LBM to get bitten because he picked the wrong one up.
Yeah.  I said, "...picked the wrong one up."
LBM has two responses to insects and arachnids.
1.  The squat and follow
This technique allows LBM to enjoy the little critter for as long as his interest lasts.  He crouches as close as possible and stares, sometimes employing the "blow on it slightly" agitation technique.  If the critter is agitated into movement, LBM simply follows slowly behind and crouches again.  This series can repeat it's self over and over as the critter and attention spans allow.
2.  The see and squash
This technique does not allow for much appreciation of the critter and is often the result of LBM's failed attempts to pick up the critter.  Once the critter has been spotted, LBM moves in to attempt to capture it.  If the critter successfully evades capture several times LBM will attempt to immobilize the critter to aid in capture.  This is often accomplished via the bottom of his shoe.  Even after several explanations regarding the effects of one's shoe bottom on such a small critter, LBM refuses to discontinue this observation technique.  (I attempt to thwart this technique as often as possible)
For now I attempt to teach a distanced appreciation of all the little critters that we find along the way
...and stay current on my insect identification, just in case.