1.  The majority of my runs so far this week have been on the treadmill.
And this is why: 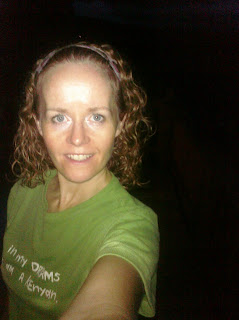 This is how dark it is when I was done running last night.  Ugh!
It is only October 7th.  I wonder if I will ever even see the sunshine once the time changes?!
At least I know that I won't have a problem making myself get on the mill over the winter.
2.  "Done?  Me run."  That is what LBM says everyday as we approach our house at the end of our jogging stroller runs.  He already knows when we are getting close to the house and will start asking.
It is so cute.
Who know it would take three children before I finally got one that will want to run with me.
No.  Check that.
He wants to run faster than me.
Already.
Because once he is out of the stroller and running down the center of the road.
(Yeah okay you've all seen the pictures.  It's not a surprise!)
He yells over his shoulder, "Beat you.  Beat you."  As he giggles hysterically. 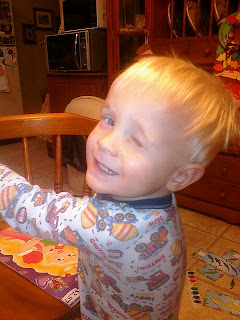 3.  Question?  How many of you go "commando" while running?
The reason I ask.
Wednesday night I had already set the kiddos up with a snack and a movie and was changing into my running gear when I realized I had my shorts but nothing for under them.
I know that my running shorts are equipped to be worn than way but I was fussing with them the entire run.
So I ask, do you go commando or not?  Why?  Any lessons learned that helped you make your choice?
Posted by Shellyrm ~ just a country runner at 7:33 AM