A good piece of advice

When I have too much time on my hands I often end up accomplishing less.
I am off work for the week spending some time at the new house in VA.
First off, it's hot!
This is not the situation where I should be waiting until 1 o'clock in the afternoon to get out for my run however that is exactly what happened yesterday and it looks promising again for today.  Ugh! 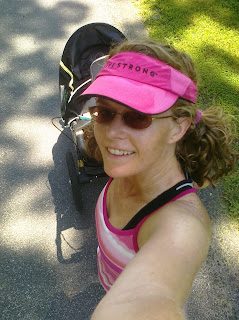 Thank goodness for shade!
43 days ~ 63 runs
With loads of things to get done and hubbs doing Reserve duty during the day I have to squeeze in what miles I can.  I would like to get up early and run before Hubbs leaves but with LBM not sleeping well in unfamiliar surroundings getting up early is not easily done.
Plus a brand new mattress didn't help the get up early efforts! 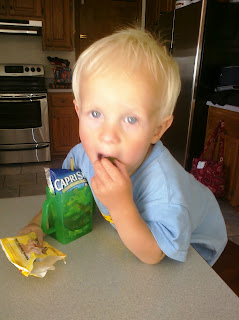 A treat after my nap on the run
We got in 7.77 miles ~ that was just how the distance worked out.  I am still in the process of finding suitable routes here.  I carried water and LBM napped the entire way.
I have found a realitively safe route that I have been extending with each run.  There are 4 dogs on this route, a decent amount of shade and one advice giving little old lady.
She was on her front porch when I went past her house which is on a dead end road.  So as I ran back past her house she was slowing finishing her walk out to the road.  I think it was something that took her quite a bit of effort to accomplish. 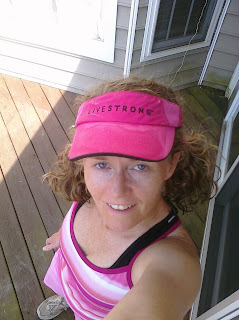 Running skirt ~ run approved!
As LBM and I ran by her she offered me some advice perhaps she believed I hadn't thought of it before, "Don't let that little babe get away from you!"
I thought, Oh someday it will happen but probably not for another 16 years.  Until then I'll hold on tight!
Posted by Shellyrm ~ just a country runner at 8:22 AM