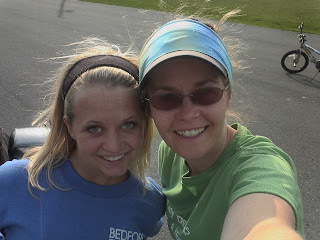 Today after getting little bug-man to take a nap in his crib which rarely happens, I was graced with the company of biking sherpa.  I had to promise to only go for the 6.5 mile loop since she was not feeling up to a long ride today.
With that in mind we simply split the run into two slightly separated doubles. 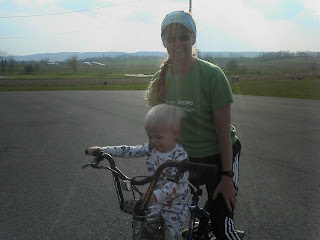 After the first 6.5 was completed we gathered s'getti noodle and all heading to the church (we live next door) to let the younger kiddos play and ride bikes while biking sherpa and I chatted.  We don't get together as much as I wished we did so it is always nice to catch up.
Little bug-man was most interested in proving HE could ride the big boy's bike without any help.  He wouldn't let me touch the handle bars to help him steer!  We chatted and played for about an hour and then Jr biking sherpa, little bug-man and I headed out for another 3.5 miles out and back while s'getti noodle and biking sherpa stayed behind. 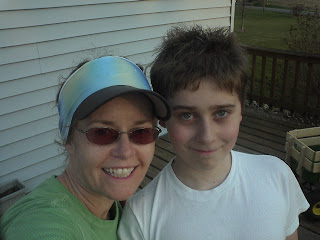 Thanks to my biking sherpa I pulled some faster times on these two runs.  Thanks guys!  But I think we all had fun and enjoyed the sun filled afternoon.
How did you fill your Sunny Sunday?
Posted by Shellyrm ~ just a country runner at 7:39 PM