Last night's run was full of adventure!
First I was happily joined by the Biking Sherpa who did not cringe when I mentioned that I might be interested in making it a little longer if LBM was sleeping after the 6.5 mile loop.  Even though I posted my "plan" for the week there is always room for a little early week padding just incase things don't go the way I have planned. 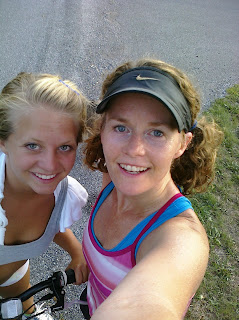 Biking Sherpa entertained me with her young girl tales of a friend's wedding and driving to and from Pittsburgh in one evening to attend.  Oh, to be young and adventurous!  The miles clicked by and LBM snoozed on.  As we finished our loop I was already drenched with sweat and figuring that we were done but Biking Sherpa said that LBM was still asleep so we needed to just keep rolling.
Off we went!  That is when I picked up my first running client.  I had know that she wanted to get in better shape and potentially train for a 5k but I was unprepared to the determination that she already had.  I knew in her younger days she had been quite a runner but age and an injury had sidelined her. 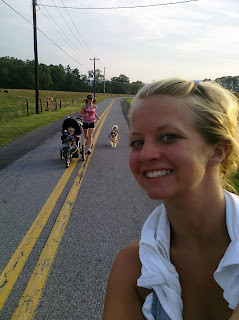 We kept a fairly steady pace as we ran our 3.5 out and back.  Biking Sherpa attempted to record the run via 6 thousand photographs while riding her bike and nearly crashing several times.  The entertainment helped the miles fly for my new client. 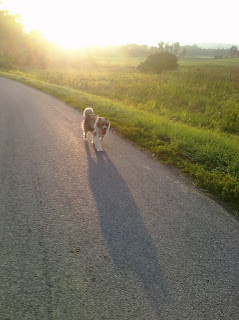 At 91 years old she really held her own and that perfect form from her youth came right back.  I was so proud of Ripley for finishing her first 5k+ in years and setting a new PR.
I am sure she will be returning for another session. 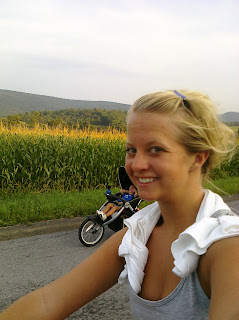 As we neared the last half mile LBM started to wake probably from all the giggling over Biking Sherpa's extreme photography session.  I was trying to get this run over put on a push to the end because I was uncomfortably drenched ready to get back and play with the kids.
Everyone had a great time during our crazy run!
Day #92 could not have been better.
Who knows what we'll do in a week for the 100th day?! 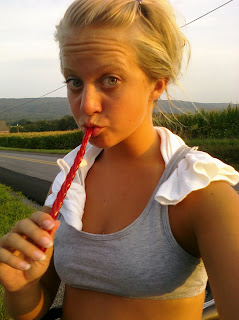 When you run with a crazy Biking sherpa, a almost 2 year old
and a 91 year old dog, fueling options are not always mainstream.

What is The Silver Maple?
Uniquely special, smile-inspiring creations made just for you in sterling silver and copper.
Who is Angie?
Angie is a ubber busy amazingly successful working barefoot running mom who seems to somehow find that elusive 25th hour in each day.  I don't know how she does it but I wouldn't be suprise if she'd written a book about it all and going on tour next month.  She is just that inspiring.
So head over and support her.  Let a few encouraging words and oh, if you must, go ahead and enter the giveaway.  It will look better when I win if there are loads of entries.
heeheehee
Posted by Shellyrm ~ just a country runner at 8:32 AM