After work Monday LBM and I hit the road.  Usually LBM naps a bit while I run, last night however he was a live wire.  He chatted his way along our usual 6.5 mile loop.  He threw goldfish to the cows that we passed along the way, threathened all manner of wildlife with his no-longer-glowing glo stick, say dozens of songs as a medley, discharged three packages of gummies in an attempt to ensure the local insect population is thriving, and added half a cup of juice to the ground so the insect would have something to wash it all down with.
He is so ecologically aware! 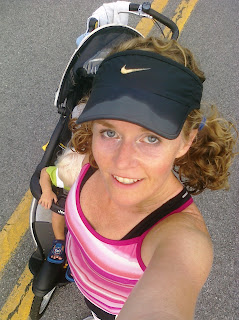 Run # 96 (6.5 miles / 53:02)
After our run s'ghetti girl joined us for a walk to cool down.  She had been suprised by the tooth fairy.  It seems that TF came while I was running (she's sneaky) and left a little stuffed animal in exchange for s'ghetti's tooth.  TF doesn't come during the day, you say?  Well she can't fly in the rain so she had no choice but to attempt such a risky delivery during the day.
I know at s'ghetti girl's age it is a wanting that keeps her "believing" in someone beyond what she can see.  In this case the TF.  It is hard to let those things go.  They serve such a good purpose when teaching children to believe in the absence of "proof."  It's the beginning of faith.  Believing without seeing.  It's the beginning of knowing that somethings are possible even when others think they are not.
Big lessons from such a small fairy. 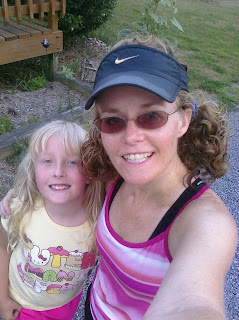 After the TF suprise!
This morning dawned with fog.  Oh how I LOVE fog!
I wish I had more time in the morning to go farther.  There is little as sweet as an early morning fog run. 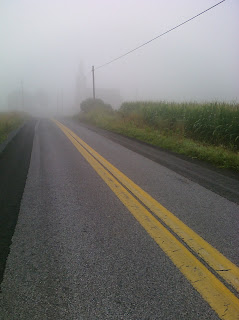 A beautiful foggy morning
But I only had time for my out and back of 3.5 miles followed by a walk and stretching.
Three more runs and then I'm done.... 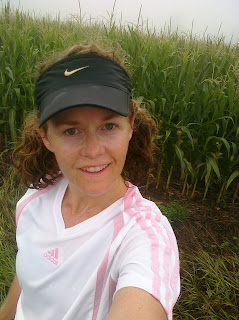